External hard drives free up storage, offer portability, and provide a lifeline in case of computer disaster. It pays to take good care of these compact, convenient devices.
Here are some helpful strategies. 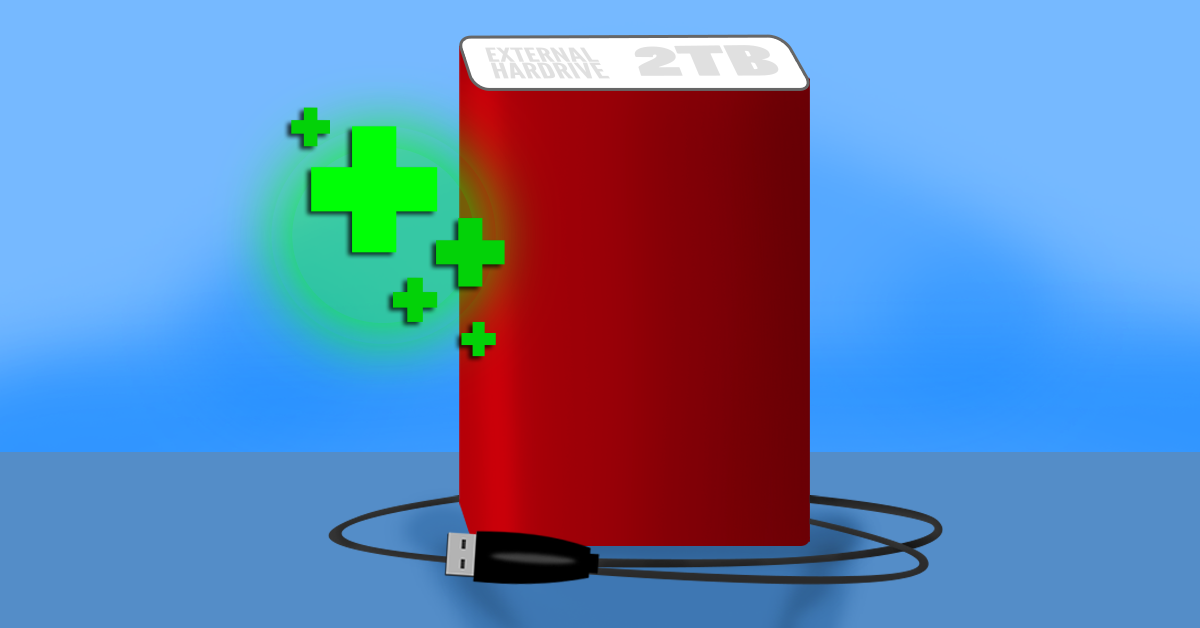 Depending on the type of drive you have, impact could damage it. The hard drive's mechanical drives work a little like a record player. Envision a spinning platter and a needle reading it. Any sort of shock or hard impact can cause the needle to slam into the platter which will scratch it and render that part of the platter unusable. Most modern external drives have shock absorbing bits surrounding the drive but even they don't solve everything.

Note, you don't have to worry about this as much with a Solid State Drive (SSD) as there are no moving parts. As long as the case is (mostly) intact, everything should still work.

2. Don't pull too hard when disconnecting.

You can damage the drive port with a hard or sideways yank on its USB plug. Remove the device cable with a gentle pull. It's best to unplug the drive cable when it's not in use. Then, when you are reconnecting the external drive, inspect the connector before plugging the cable back in. Look for any damage, debris, or corrosion to help maximize the device's lifespan. A common issue we see is a small dust bunny or piece of hair logged into one of the connectors. This then causes an electrical short which at best will make things work unreliably and at worst may fry the drive and the port it's plugged into.

You may be in a hurry, but always take the time to remove the hard drive from your desktop before physically unplugging it. On Windows, you'll usually right click on the drive and press Eject. For Macs, you can drag the drive icon to the recycle bin (which changes to an eject button). Never unplug the drive while moving data to or from it. Doing so risks data corruption which can cause the loss of everything on the drive!

Ever put your hand on the hard drive after prolonged use? It's hot. Don't immediately store it away in a bag or tight space. Give it some time to cool off first. When it's out, and in use, keep the drive's vents clear of other objects so that it has some airflow. Set it on a flat, level surface. Avoid placing it on paper, towels, or other cloth items that could add to its heat levels.

And whatever you do, don't lose it on the floor amidst the sea of dust and dirt which can clog up vents and insulate heat.

OK, you're probably not going to do that. Yet it's our way of reminding you that condensation is an enemy to your hard drive. Hard drive failures can be caused by environmental factors such as temperature and air quality too. If you live in a very humid climate, try to keep the drive in a controlled environment. If you're unable to do this, you may instead opt to invest in a larger drive. Many of the largest external drives (8TB, 10TB, etc) are fully sealed helium-filled drives which are less susceptible to condensation. Still, try to make sure you keep your drive out of the pool this summer.

A hard drive isn't going to last forever. They aren't built for that. They can also get lost or stolen. Don't let one external hard drive be the only place you are backing up your data. Have a backup on your computer, on the drive, and a copy in the cloud. Then, you'll always be ready to move on to a new drive that you will love with the same care and consideration outlined above.