One of the most common calls we get are customers saying that their computer has "frozen". While it's a very common term, did you know that there are differences between a system that's "frozen" and one that's "hanged" or even "crashed"? So which one might yours be? Today, we're going to take a look at these differences and give you a little background on each of them. 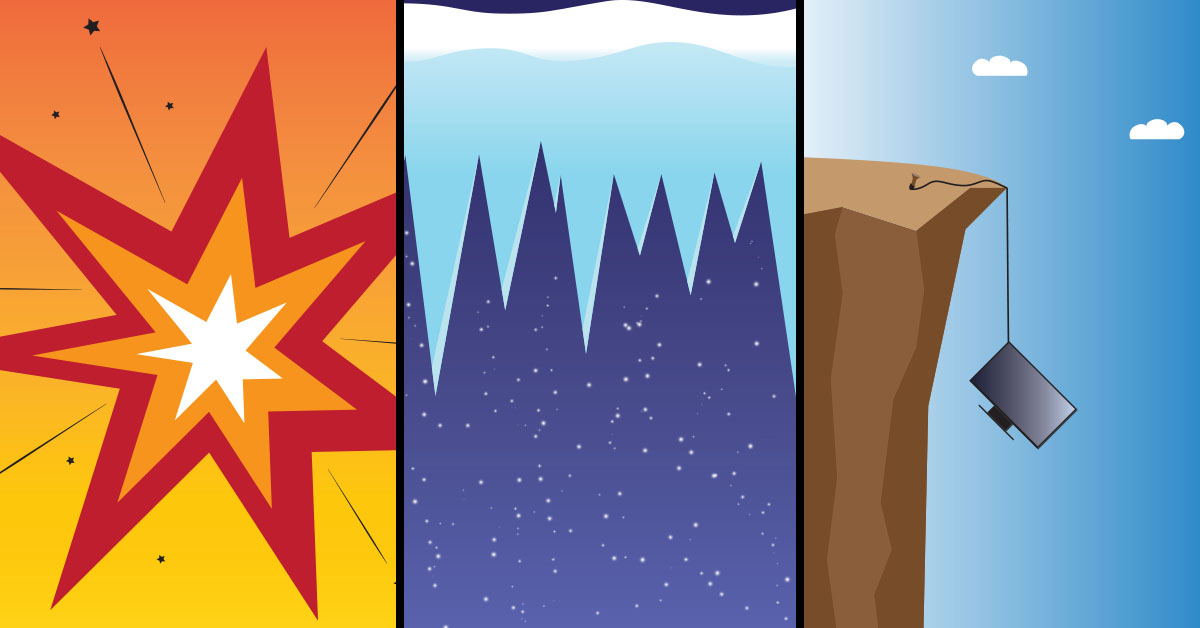 What is a "Frozen" computer?

A system that is “frozen” is one that is completely unresponsive and unusable. The keyboard does not function, the mouse cursor will not move at all and, in some cases, there may be a strange sound coming from the system's speakers. Systems in this state are known as frozen or hard locked. In most cases, this type of problem is the result of a hardware issue and many times, a failing hardware component.

A second term that many people mistake for a freeze is a hang. A hang differs from a freeze in quite a substantial way in that, while a freeze renders the system completely inoperable, a hang can still allow some (very limited) functionality.

There are essentially two types of hangs: application hangs and system hangs. An application hang is typically related to only a single program. Many times, you will see the familiar "the program is not responding" message and the program’s window will turn white. It's important to note that an application may appear to hang but, in reality, it is simply doing a lot of work. This is especially true of business applications which process data or create reports. Just because a program appears to be hanging, does not mean it isn't doing it's job! If you notice an app that appears to be hanging, give it a little while and it may just come back to life.

A system hang is when the operating system itself is the program that has stopped responding and is more similar to a freeze. The easiest way to tell the difference between a hang and a freeze is that you can move your mouse during a hang, but you cannot move it at all during a freeze. A hang will also allow basic functions like the computer clock to still function, but a freeze does not.

There are many reasons why an application or the system itself can hang ranging from a bug in the program to hardware issues in the computer itself (frequent hangs can be a sign of hard disk failure). The most common way to fix application hangs is to "end" the program in question either by clicking the "End Now" button when prompted (if available) or by using the task manager to end the program. For system hangs, restarting the computer is usually your best bet but that may not always be an available option. In these cases, the only remaining option may be to perform a hard reset just like in the event of a freeze. If you are experiencing frequent system hangs, it could indicate a deeper issue that should be looked into.

Now that we know what freezes and hangs are, it’s time to look at the third member of the family: crashes. Crashes are what happens when a computer program experiences a problem which it doesn’t know how to handle. If it were to continue running it might cause big problems so, as a result, the program will simply close itself down.

Like hangs, there are two different types of crashes: application and system. In the event of an application crash, you may see an error message or a dialogue box about the issue and on Windows you may see the infamous "the program has experienced a problem and needs to close" message. Other times the program may just disappear from the screen with no warning leaving you confused as to what just happened.

System crashes on the other hand are what happens when the operating system itself has a problem and immediately shuts down. For Windows users this is commonly known as the "Blue Screen of Death" or "BSOD". While application crashes can typically be traced down to programming bugs, system crashes can take on a larger number of possible causes. Fortunately, most system crashes will leave a log of what happened to cause the crash which allows an expert to more easily diagnose what the problem is and fix it.

So now that you know the difference between freezes, hangs and crashes what should you do if you experience one of these problems?

If the problem is infrequent (ie: happens once every few months) your best bet is to use the methods described above to get back up and running. Make sure that your applications and operating system are up-to-date to help prevent or resolve these issues and, if you’re feeling extra concerned, running a malware scan won’t hurt either.

However, if the problem is frequent (ie: happens a couple times a week, once per session, etc) then it is likely indicative of a larger issue and it's time to have your system looked at by a professional.